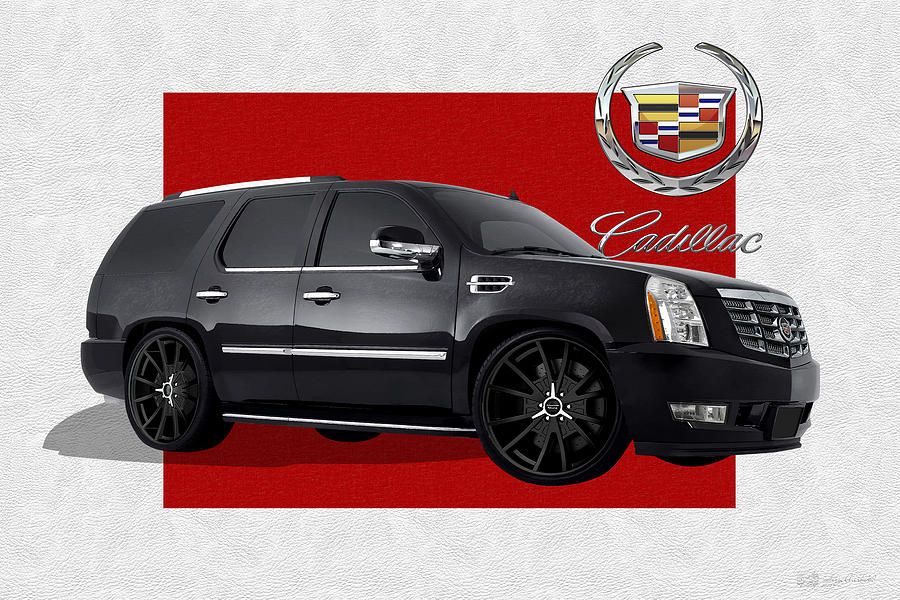 Cadillac Escalade with 3 D Badge is a photograph by Serge Averbukh which was uploaded on December 25th, 2015.

Introducing ‘Cadillac’ collection by Serge Averbukh, showcasing digital paintings of some of the coolest and most sought after Cadillac models of... more

Introducing ‘Cadillac’ collection by Serge Averbukh, showcasing digital paintings of some of the coolest and most sought after Cadillac models of past and present along with amazingly crafted car makers’ insignia and heraldry. Here you will find framed and wrapped/stretched canvas fine art prints, featuring a digital painting of a Cadillac Escalade with 3D Badge.
Cadillac, formally the Cadillac Motor Car Division is a division of United States-based General Motors Company (GM) that markets luxury vehicles. Cadillac's primary markets are the United States, Canada, and China. Cadillac-branded vehicles are also distributed in 34 additional markets worldwide. Cadillac is currently the second oldest American automobile brand following fellow GM marque Buick and is among the oldest automobile brands in the world. Cadillac was founded in 1902 by Henry Leland, a master mechanic and entrepreneur, who named the company after Antoine Laumet de La Mothe, sieur de Cadillac, the founder of the city of Detroit, and the Cadillac crest is based upon his coat of arms.
General Motors purchased the company in 1909 and within six years, Cadillac had laid the foundation for the modern mass production of automobiles by demonstrating the complete interchangeability of its precision parts while simultaneously establishing itself as America's premier luxury car. Cadillac introduced technological advances, including full electrical systems, the clutchless manual transmission and the steel roof. The brand developed three engines, with the V8 engine setting the standard for the American automotive industry.
The Cadillac Escalade is a full-size luxury SUV engineered and manufactured by Cadillac. It was Cadillac's first major entry into the popular SUV market. The Escalade was introduced for the 1999 model year in response to German and Japanese competitors and to Ford's 1998 release of the Lincoln Navigator. The Escalade project went into production only ten months after it was approved. The Escalade is built in Arlington, Texas. The name Escalade refers to a siege warfare tactic of scaling defensive walls or ramparts with the aid of ladders or siege towers.
The 1999 Escalade was identical to the 1999 GMC Denali, but was redesigned for the 2002 model year to make its appearance fall more in line with Cadillac's "art and science" design theme. Escalade production went on hiatus for the 2001 model year. The Escalade ESV (based on the Chevrolet Suburban) and its former sibling the Escalade EXT (based on the Avalanche sport utility truck) were made in Silao, Mexico, before the 2007 redesign; the new Escalade ESV is sourced from Arlington, Texas.
As of 2015, the Cadillac Escalade is available in every country that Cadillac is available in, except Israel. The Escalade ESV version is available in the United States, Canada, Mexico, and the Middle East. It is Cadillac's largest luxury oriented, passenger