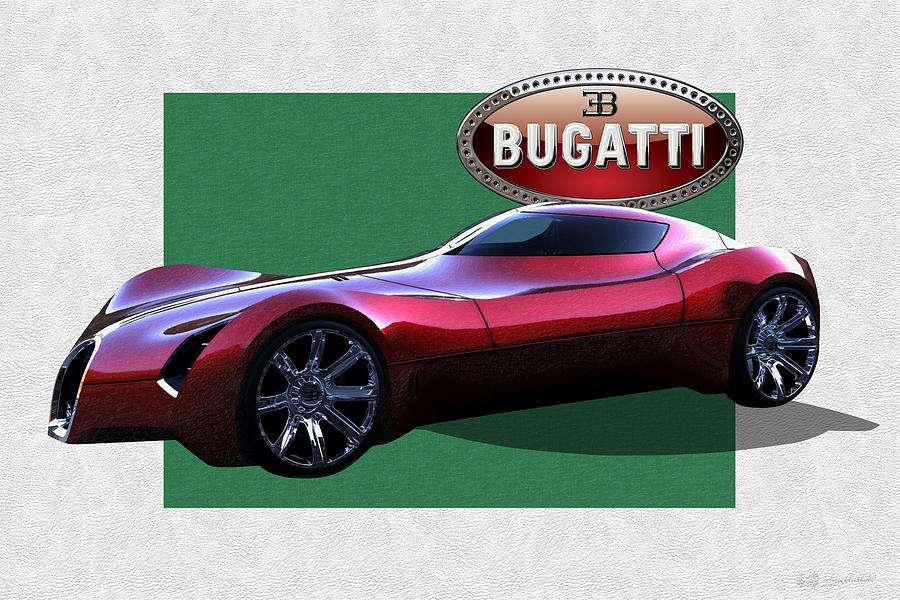 2025 Bugatti Aerolithe Concept with 3 D Badge is a photograph by Serge Averbukh which was uploaded on December 26th, 2015.

Introducing ‘Bugatti’ collection by Serge Averbukh, showcasing digital paintings of some of the coolest and most sought after Bugatti models of past... more

Introducing ‘Bugatti’ collection by Serge Averbukh, showcasing digital paintings of some of the coolest and most sought after Bugatti models of past and present along with amazingly crafted car makers’ insignia and heraldry. Here you will find framed and wrapped/stretched canvas fine art prints, featuring a digital painting of a 2025 Bugatti Aerolithe Concept with 3D Badge.
Automobiles Ettore Bugatti was a French car manufacturer of high-performance automobiles, founded in 1909 in the then German city of Molsheim, Alsace by Italian-born Ettore Bugatti. Bugatti cars were known for their design beauty (Ettore Bugatti was from a family of artists and considered himself to be both an artist and constructor) and for their many race victories. The death of Ettore Bugatti in 1947 proved to be the end for the marque, and the death of his son Jean Bugatti in 1939 ensured there was not a successor to lead the factory. No more than about 8000 cars were made. The company struggled financially, and released one last model in the 1950s, before eventually being purchased for its airplane parts business in the 1960s. In the 1990s, an Italian entrepreneur revived it as a builder of limited production exclusive sports cars. Today, the name is owned by German automobile manufacturing group Volkswagen.
Inspired by the 1935 Bugatti Aerolithe prototype, which featured a lightweight body made from Elektron (an aeronautical-grade magnesium alloy), Hogg's modern interpretation has been created for the year 2025. Built as a quarter-scale model from high-density foam with milled, polished and engraved aluminium wheels, the modern concept's design pays homage to the original prototype, with an emphasis on the long, exaggerated bonnet and front guards, classic split windscreen and bobtail rear. It also features gullwing doors, a pronounced "horseshoe" trademark front grille and a narrow cabin for two. The polished aluminium centre spine is a key styling and construction feature harking back to the original car's riveted central seam going from nose to tail. The designer says the exclusive grand tourer could be powered by a hybrid system consisting of micro turbines and electric motors supported by nickel-hybrid batteries. The micro turbines could, in turn, be motivated by petrol, diesel or natural gas.