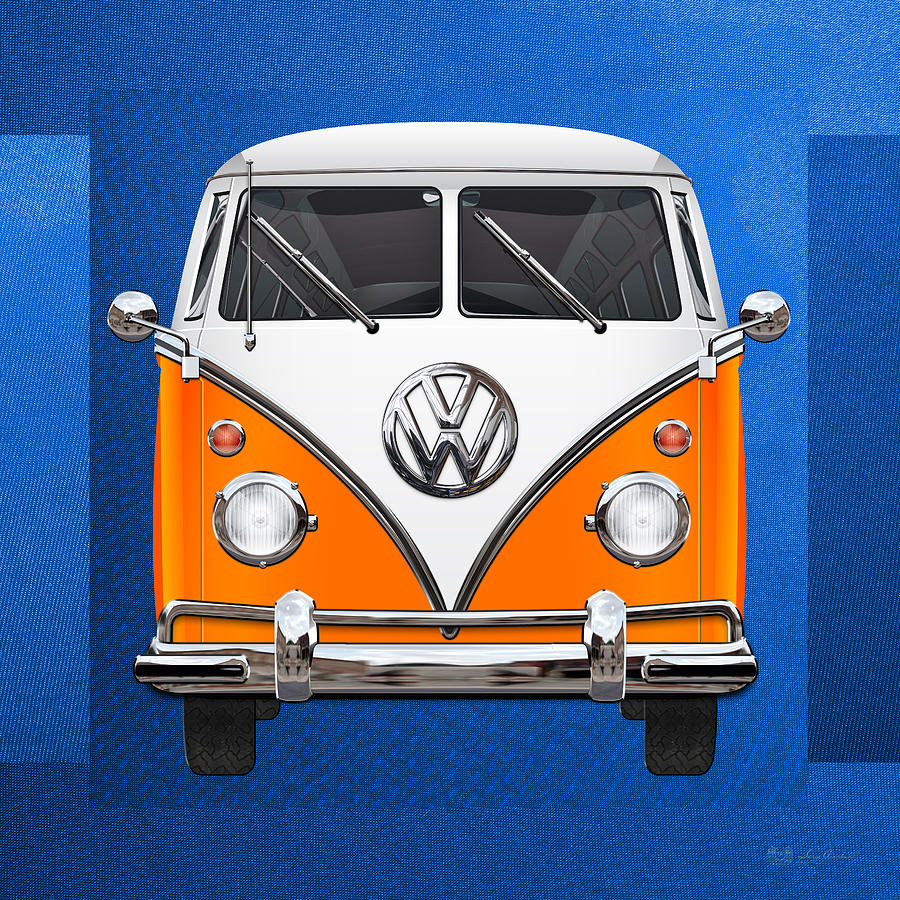 Volkswagen Type - Orange and White Volkswagen T 1 Samba Bus over Blue Canvas is a photograph by Serge Averbukh which was uploaded on March 28th, 2016.

Introducing 'Volkswagen Type 2' collection by Serge Averbukh, showcasing convergent media paintings of some of the coolest and most sought after Volkswagen Type 2 models. Here you will find framed and wrapped/stretched canvas fine art prints, featuring a Volkswagen Type 2 Orange and White Volkswagen T1 Samba Bus over Blue Canvas.
The Volkswagen Type 2, known officially (depending on body type) as the Transporter, Kombi or Microbus, or, informally, as the Bus (US) or Camper (UK), is a cabover panel van introduced in 1950 by the German automaker Volkswagen as its second car model. Following – and initially deriving from Volkswagen's first model, the Type 1 (Beetle) – it was given the factory designation Type 2.
As one of the forerunners of the modern cargo and passenger vans, the Type 2 gave rise to forward control competitors in the United States in the 1960s, including the Ford Econoline, the Dodge A100, and the Chevrolet Corvair 95 Corvan, the latter adopting the Type 2's rear-engine configuration. European competition included the 1960s FF layout Renault Estafette and the FR layout Ford Transit.
Like the Beetle, the van has received numerous nicknames worldwide, including the "microbus", "minibus", and, because of its popularity during the counterculture movement of the 1960s, Hippie van/wagon, and still remain iconic for many hippies today.
Brazil contained the last factory in the world that produced the T2. Production in Brazil ceased on December 31, 2013, due to the introduction of more stringent safety regulations in the country. This marks the end of an era with the rear-engine Volkswagens manufactured (after the 2002 termination of its T3 successor in South Africa), which originated in 1935 with their Type 1 prototypes.
The Volkswagen Samba, in the United States also known as Sunroof Deluxe, was the most luxurious version of the Volkswagen Transporter T1. Volkswagen started producing Sambas in 1951. In the sixties this version became popular as a hippie bus.
Originally Volkswagen Vans were classified according to the number of windows they had. This particular model had 23 and later 21 windows including eight panoramic windows in the roof. To distinguish it from the normal 23 or 21-window Volkswagen van the name Samba was coined.
Instead of a sliding door at the side the Samba had two pivot doors. In addition the Samba had a fabric sunroof. At that time Volkswagen advertised with the idea of using the Samba to make tourist trips through the Alps.
Sambas were standard painted in two colors. Usually, the upper part was colored white. The two colored sections were separated by a decorative strip.