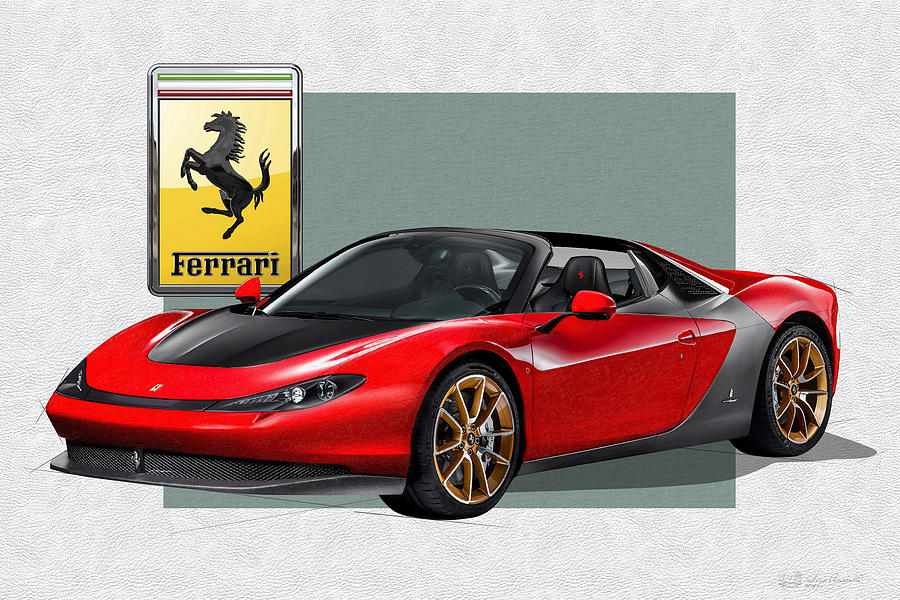 Ferrari Sergio with 3D Badge is a photograph by Serge Averbukh which was uploaded on January 19th, 2016.

Introducing ‘Ferrari’ collection by Serge Averbukh, showcasing digital paintings of some of the coolest and most sought after Ferrari models of past... more

Introducing ‘Ferrari’ collection by Serge Averbukh, showcasing digital paintings of some of the coolest and most sought after Ferrari models of past and present along with amazingly crafted car makers’ insignia and heraldry. Here you will find framed and wrapped/stretched canvas fine art prints, featuring a digital painting of a Ferrari Sergio with 3D Badge.
Ferrari S.p.A. is an Italian sports car manufacturer based in Maranello, Italy. Founded by Enzo Ferrari in 1929, as Scuderia Ferrari, the company sponsored drivers and manufactured race cars before moving into production of street-legal vehicles as Ferrari S.p.A. in 1947. Fiat S.p.A. acquired 50% of Ferrari in 1969 and expanded its stake to 85% in 2008, which it still holds today. Throughout its history, the company has been noted for its continued participation in racing, especially in Formula One, where it has had great success. Ferrari road cars are generally seen as a symbol of speed, luxury and wealth.
Ferrari Sergio is a sports car inspired by the prototype designed by Pininfarina in 2013. It was built in six specimens and uses the naturally aspirated V8 of the Ferrari 458 Special.
The first production Ferrari Sergio was delivered to the SBH Royal Auto Gallery in the United Arab Emirates in December, 2014. Deliveries continueD in January, 2015, with three sent to customers in the US, one to Japan and one to Switzerland.
Pininfarina Sergio is a concept car first shown during the 83rd Geneva Motor Show (5–17 March 2013) and is a tribute to Sergio Pininfarina, who died July 3, 2012, at the age of 85 years. The Sergio is a custom roadster in style that Pininfarina used in the designing of the Ferrari 458 Spider, upon which the Sergio concept in turn is based mechanically.