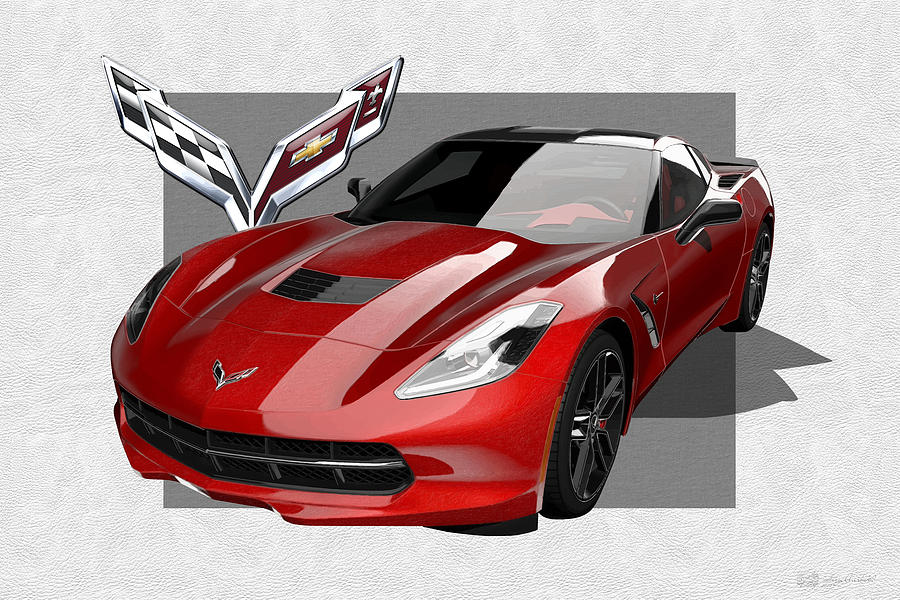 Chevrolet Corvette C 7 Stingray with 3 D Badge is a photograph by Serge Averbukh which was uploaded on December 26th, 2015.

Introducing the ‘Chevrolet Corvette’ collection by Serge Averbukh, showcasing digital paintings of some of the coolest and most sought after... more

Introducing the ‘Chevrolet Corvette’ collection by Serge Averbukh, showcasing digital paintings of some of the coolest and most sought after automobiles of past and present along with amazingly digitally crafted car makers’ insignia and badges (logos). Here you will find framed and wrapped/stretched canvas fine art prints, featuring Chevrolet Corvette C7 Stingray with 3D Badge.
The Chevrolet Corvette is a sports car by the Chevrolet division of General Motors (GM) that has been produced in seven generations. The first model, a convertible, was designed by Harley Earl and introduced at the GM Motorama in 1953 as a concept show car. Myron Scott is credited for naming the car after the type of small, maneuverable warship called a corvette. Originally built in Flint, Michigan and St. Louis, Missouri, the Corvette is currently manufactured in Bowling Green, Kentucky and is the official sports car of the Commonwealth of Kentucky.
The Chevrolet Corvette (C7) is a sports car produced by Chevrolet. The seventh generation Corvette was introduced for the 2014 model year as the first to bear the Corvette Stingray name since the 1976 third generation model. The first C7 Corvette was delivered in the 3rd quarter of 2013. According to Motor Trend, GM executives have been planning the next-generation (C7) Corvette since 2007. On October 18, 2012, GM made an official news announcement confirming the seventh-generation Chevrolet Corvette would debut on Sunday evening, January 13, 2013, in Detroit at the North American International Auto Show. Chevrolet also showed the new Crossed Flags logo for the new 2014 Corvette. The car was originally planned for the 2011 model year, but was delayed. Mid-engine and rear-engine layouts had been considered, but the front-engine, rear-wheel drive (RWD) platform was chosen to keep costs lower. The C7's all-new LT1 6.2L Small Block V-8 engine develops 455 horsepower (339 kW) and 460 pound-feet (620 N•m) torque, which can accelerate the Corvette from 0-60 mph in 3.8 seconds. The C7's suspension consisted of independent unequal-length double wishbones with transverse fiberglass mono-leaf springs and optional magnetorheological dampers, similar to its predecessor. The C7 was designed not only to provide a bold styling statement, but also to incorporate an interior makeover that would put to rest past complaints about the quality of interior fit and finish. While overall the C7 attempts to provide an evolutionary redesign to an iconic theme, the car's designers took their inspiration from the 5th generation Chevrolet Camaro's squared rear end, incorporating aggressive angular elements that disappointed many Corvette enthusiasts. The C7 received instant criticism for some of the most overstyled elements of the car. Functional aerodynamic aids are tacked on or cut into every body panel of the C7, often juxtaposed against sharp creases. This is a radical departure from the prior generations of Corvettes, whose clean muscular styling revealed no tack-on spoiler, few body panel creases, and only semi-functional gills for front brake cooling. In addition, past Corvette models minimized the size of headlamps or even hid them altogether. The C7 reverses that clean minimalist styling language with oversized, intricately styled headlamps with LED accents.