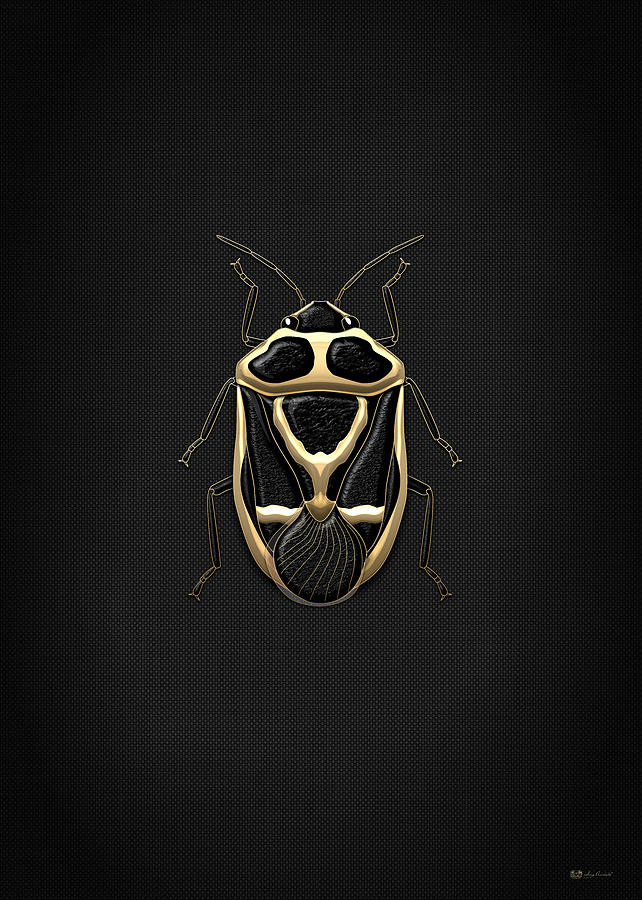 Black Shieldbug with Gold Accents is a photograph by Serge Averbukh which was uploaded on May 2nd, 2015.

Introducing “Luxury Bugs” series, a part of the "Beasts, Creatures and Critters" collection by Serge Averbukh. This collection features various living beings of this planet in all their obvious and not so obvious glory. It was meant to celebrate diversity of life without any bias or hesitation.
Here you will find a selection of fine art prints, framed as well as stretched/wrapped canvas, featuring a Black Shieldbug with Gold Accents on Black Canvas...
Pentatomoidea is a superfamily of insects in the Heteroptera suborder of the Hemiptera order and, as such, share a common arrangement of sucking mouthparts. They are commonly referred to as shield bugs, chust bugs, and stink bugs. There are about 7000 species under Pentatomoidea, divided into 14 to 15 families. Pentatomoidea are characterized by a well developed scutellum (the hardened extension of the thorax over the abdomen). It can be triangular to semi-elliptical in shape. Pentatomoidea usually have antennae with five segments. The tarsi usually have two or three segments.
Shield bugs have glands in their thorax between the first and second pair of legs which produce a foul smelling liquid. This liquid is used defensively to deter potential predators and is sometimes released when the bugs are handled carelessly. The nymphs, similar to adults except smaller and without wings, also have stink glands. The nymphs and adults have piercing mouthparts, which most use to suck sap from plants, although some eat other insects. When they group in large numbers, they can become significant pests.