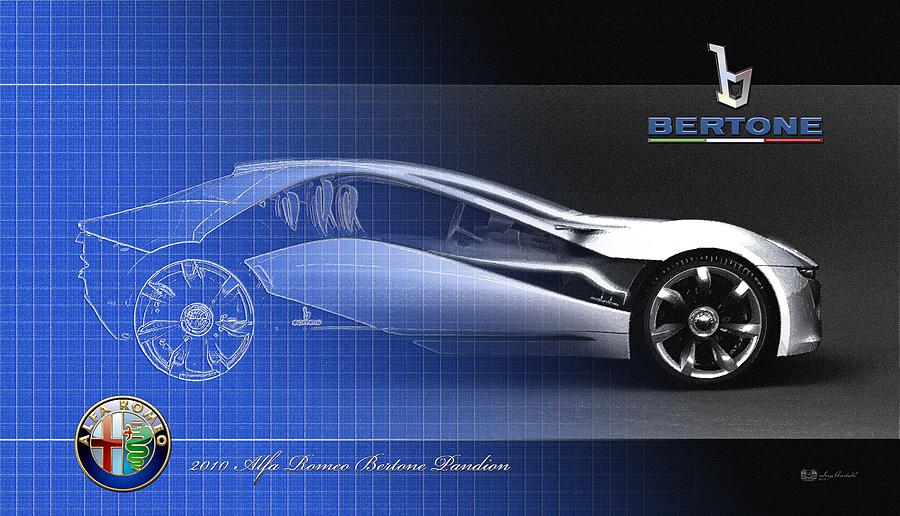 Alfa Romeo Bertone Pandion Concept is a photograph by Serge Averbukh which was uploaded on June 6th, 2015.

Introducing ‘Wheels of Fortune’ collection by Serge Averbukh, showcasing digital paintings of some of the coolest and most sought after automobiles... more

Introducing ‘Wheels of Fortune’ collection by Serge Averbukh, showcasing digital paintings of some of the coolest and most sought after automobiles of past and present along with amazingly digitally crafted car makers’ insignia and badges (logos). Here you will find framed and wrapped/stretched canvas fine art prints, featuring a digital painting of a 2010 Alfa Romeo Bertone Pandion Concept with 3D Badges.
Alfa Romeo Automobiles S.p.A. is an Italian manufacturer of cars. Founded as A.L.F.A. (Anonima Lombarda Fabbrica Automobili) on June 24, 1910, in Milan, the company has been involved in car racing since 1911, and has a reputation for building expensive sports cars. It was owned by Italian state holding company Istituto per la Ricostruzione Industriale between 1932 and 1986, when it became a part of the Fiat Group, and since February 2007 a part of Fiat Group Automobiles S.p.A.
Gruppo Bertone (simply Bertone) is an Italian automobile company, which specializes in car styling, coachbuilding and manufacturing. Bertone styling is distinctive, with most cars having a strong family resemblance even if they are badged by different manufacturers. Bertone has styled cars for Abarth, Alfa Romeo, Aston Martin, Citroën, Ferrari, Fiat, Iso Rivolta, Lancia, Lamborghini, Mercedes Benz, Opel and Volvo Cars, among others. The company is based in Grugliasco in northern Italy. Gruppo Bertone was founded as Carrozzeria Bertone in 1912 by Giovanni Bertone. Designer Nuccio Bertone took charge of the company after World War II and the company was divided into two units: Carrozzeria for manufacturing and Stile Bertone for styling. The company is currently headed by the widow of Nuccio Bertone, Lilli Bertone.
The Alfa Romeo Pandion is a concept car which premiered at the 2010 Geneva Motor Show. It was designed by Stile Bertone and the main responsibility was given to Mike Robinson. The Pandion coupé was designed as a tribute to Alfa Romeo’s one hundred year anniversary. The Pandion is based on the Alfa Romeo 8C Competizione sports car. The most eye catching feature of the car is its doors, they open by rotating backwards, opening full 90 degree upward, the whole side of the car is one door from the front fender to the rear fender. Other notable design feature can be found on the rear of the car, which has a striking array of crystal-like blades. Its very thin seats are the first to contain integrated illumination due to a new fabric lightbulb.

I love the cotrast from blueprint to photo. Well done!

Thanks, Mario. By the way, it's not a photo; it's a digital painting :) I love experimenting like this from time to time...