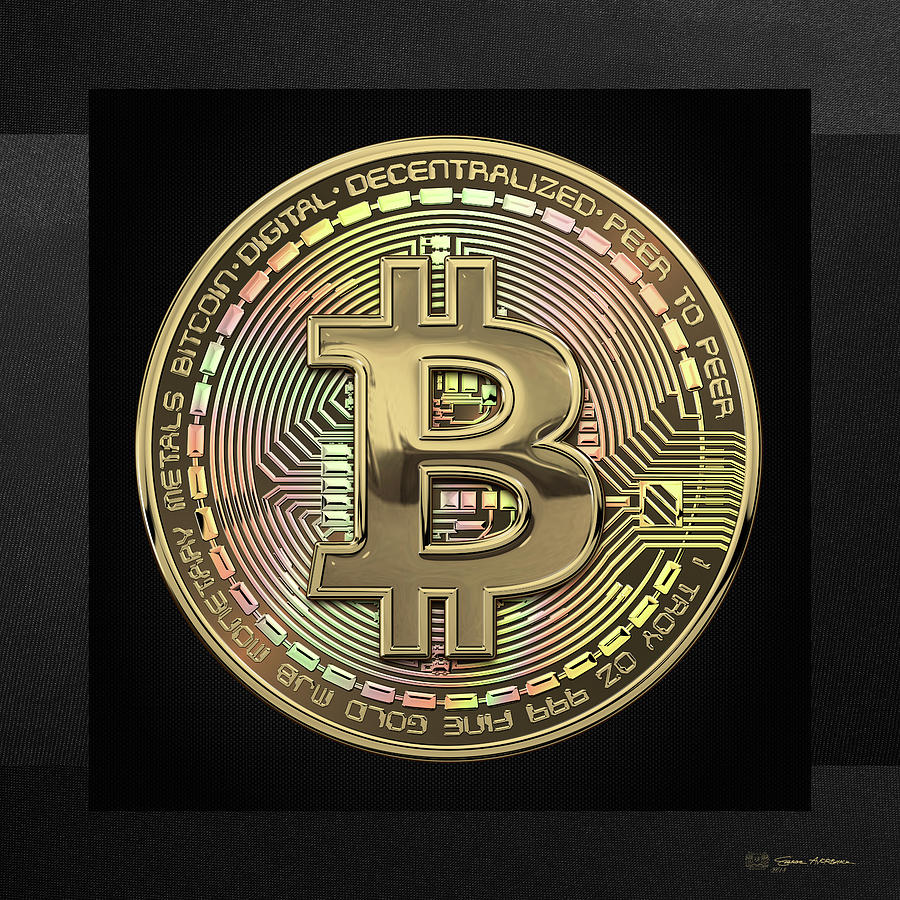 Gold Bitcoin Effigy over Black Canvas is a photograph by Serge Averbukh which was uploaded on February 16th, 2018.

Introducing ‘Money’ collection by Serge Averbukh, showcasing new media paintings of coins and paper currency from various times and places. Here you will find pieces featuring a Gold Bitcoin Effigy over Black Canvas.
Bitcoin is a cryptocurrency and worldwide payment system. It is the first decentralized digital currency, as the system works without a central bank or single administrator. The network is peer-to-peer and transactions take place between users directly, without an intermediary. These transactions are verified by network nodes through the use of cryptography and recorded in a public distributed ledger called a blockchain. Bitcoin was invented by an unknown person or group of people under the name Satoshi Nakamoto and released as open-source software in 2009.

Bitcoins are created as a reward for a process known as mining. They can be exchanged for other currencies, products, and services. As of February 2015, over 100,000 merchants and vendors accepted bitcoin as payment. Research produced by the University of Cambridge estimates that in 2017, there are 2.9 to 5.8 million unique users using a cryptocurrency wallet, most of them using bitcoin. The unit of account of the bitcoin system is bitcoin. Ticker symbols used to represent bitcoin are BTC and XBT. Its Unicode character is ₿. Small amounts of bitcoin used as alternative units are millibitcoin (mBTC), bit (ƀ) and satoshi (sat). Named in homage to bitcoin's creator, a satoshi is the smallest amount within bitcoin representing 0.00000001 bitcoins, one hundred millionth of a bitcoin. A bit equals 0.000001 bitcoins, one millionth of a bitcoin or 100 satoshis. A millibitcoin equals 0.001 bitcoins, one thousandth of a bitcoin or 100,000 satoshis.