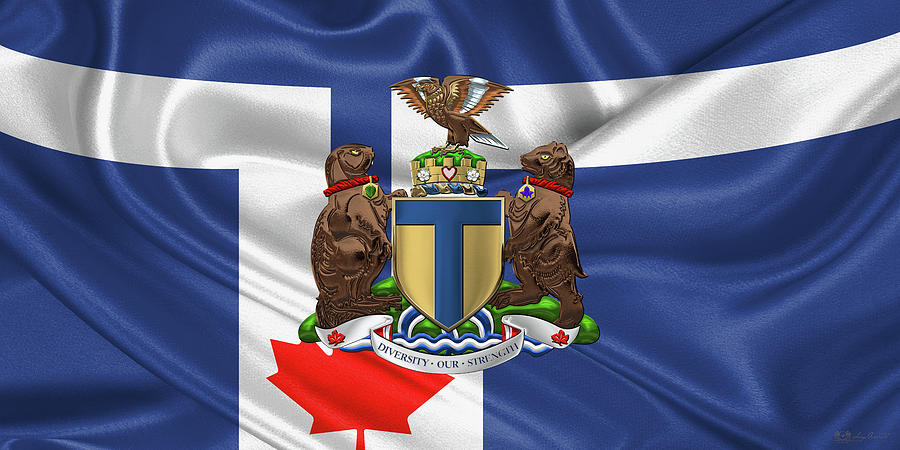 Toronto - Coat of Arms over City of Toronto Flag is a photograph by Serge Averbukh which was uploaded on October 5th, 2016.

Toronto - Coat of Arms over City of Toronto Flag

Toronto - Coat of Arms over City of Toronto Flag

Introducing 'Cities of the World' series, part of the 'World Heraldry' collection by Serge Averbukh, showcasing stunning convergent media paintings of city coats of arms, emblems and flags. Here you will find pieces featuring Coat of Arms of Toronto over City of Toronto Flag.
Toronto is the most populous city in Canada, the provincial capital of Ontario, and the centre of the Greater Toronto Area, the most populous metropolitan area in Canada. In the 2011 census, Toronto had a population of 2,615,060, making it the fifth largest city in North America. A population estimate from a city report released in 2013 shows the city is now the fourth most populous city in North America, after Mexico City, New York City, and Los Angeles. A global city, Toronto is an international centre of business, finance, arts, and culture, and is widely recognized as one of the most multicultural and cosmopolitan cities in the world.
The coat of arms of Toronto, Ontario, Canada, was designed by Robert Watt, the Chief Herald of Canada at the time, for the city after its amalgamation in 1998. The arms were granted by the Canadian Heraldic Authority on January 11, 1999. The arms displayed on the shield are designed in a way that represents the two towers of Toronto City Hall and the capital letter T, as shown in the image of the arms. The three wavy streams beneath the shield represent the three rivers of Toronto: the Humber, the Don and the Rouge. The barry wavy 'lakefront' represents Lake Ontario.
The flag of Toronto, Ontario, Canada, was designed by Rene De Santis, a 21-year-old George Brown College student. It won in a 1974 competition held by the Old City of Toronto Flag Design Committee. After the city amalgamated in 1997, the new Toronto City Council looked for different designs from the public, but could not approve of any. De Santis suggested minor modifications to the original flag, which was adopted in October 1999, to create the current flag. The flag displays the twin towers of the Toronto City Hall on a blue background, with the red maple leaf of the Flag of Canada at its base, representing the Council Chamber at the base of the towers. The shape of the space above and between the towers suggests the letter 'T', the city's initial.