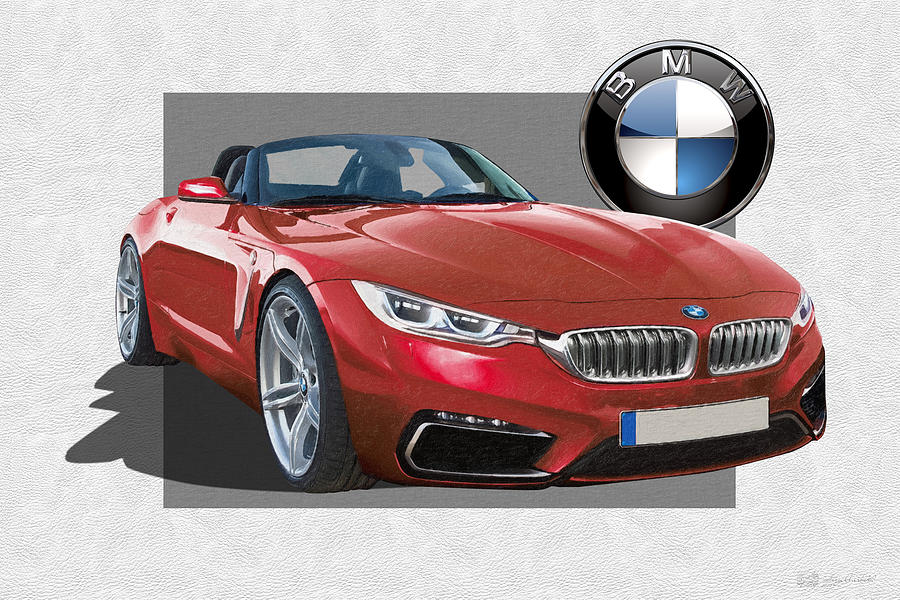 Introducing ‘BMW’ collection by Serge Averbukh, showcasing digital paintings of some of the coolest and most sought after BMWs of past and present along with amazing digitally crafted car makers’ insignia and badges (logos). Here you will find framed and wrapped/stretched canvas fine art prints, featuring a digital painting of a Red 2018 BMW Z5 with 3D Badge.
Bayerische Motoren Werke AG (English: Bavarian Motor Works), commonly known as BMW or BMW AG, is a German automobile, motorcycle and engine manufacturing company founded in 1916.
BMW is headquartered in Munich, Bavaria, Germany. It also owns and produces Mini cars, and is the parent company of Rolls-Royce Motor Cars. BMW produces motorcycles under BMW Motorrad. In 2010, the BMW group produced 1,481,253 automobiles and 112,271 motorcycles across all its brands. BMW is part of the German Big 3 luxury automakers, along with Audi and Mercedes-Benz, which are the three best-selling luxury automakers in the world.
At BMW, model-designation inflation shows no sign of abating, so the Z4 replacement becomes the Z5. Why? The real question is why not? Besides, there are bigger workings afoot here. The Z5 is the first fruit of BMW’s sports car collaboration with Toyota. Phase II of the BMW-Toyota tie-up, dubbed Silk Road, was to produce a higher-end BMW sports car and a new Lexus model. It’s on hold for now.
Instead, we will see concept versions of the new BMW Z5 and the Toyota sport coupe in the next year, with production versions to follow during the 2018 model year—the Toyota as a hardtop coupe, the BMW as a roadster. The BMW Z5 ditches its space-inefficient retractable hard top in favor of a classic soft top. The new sports car architecture that serves both models is a highly scalable matrix that revolves around a single fixed point, the front firewall.
The BMW Z5 will feature a more radical front-mid-engine bias, and light weight is a priority. Target weight for the Z5 is 3300 pounds (versus the current Z4, which ranges from 3252 to 3549 pounds). Drivetrain components are said to include a turbocharged four-cylinder engine, a choice of an eight-speed automatic or a six-speed manual transmission, and an electric clutch (to enable coasting).
The BMW Z5 will debut with its 2.0-liter turbo offered in three stages of tune: 190 hp, 245 hp, and 270 hp. An even sportier Z5M would use the 425-hp turbo six from the new 2015 BMW M3 and M4. Alternative scenarios show a straight six (Z6) and a three-cylinder (Z3). The latter would bring BMW’s nomenclature full circle, back to the brand’s first modern-day roadster, which premiered in 1996.