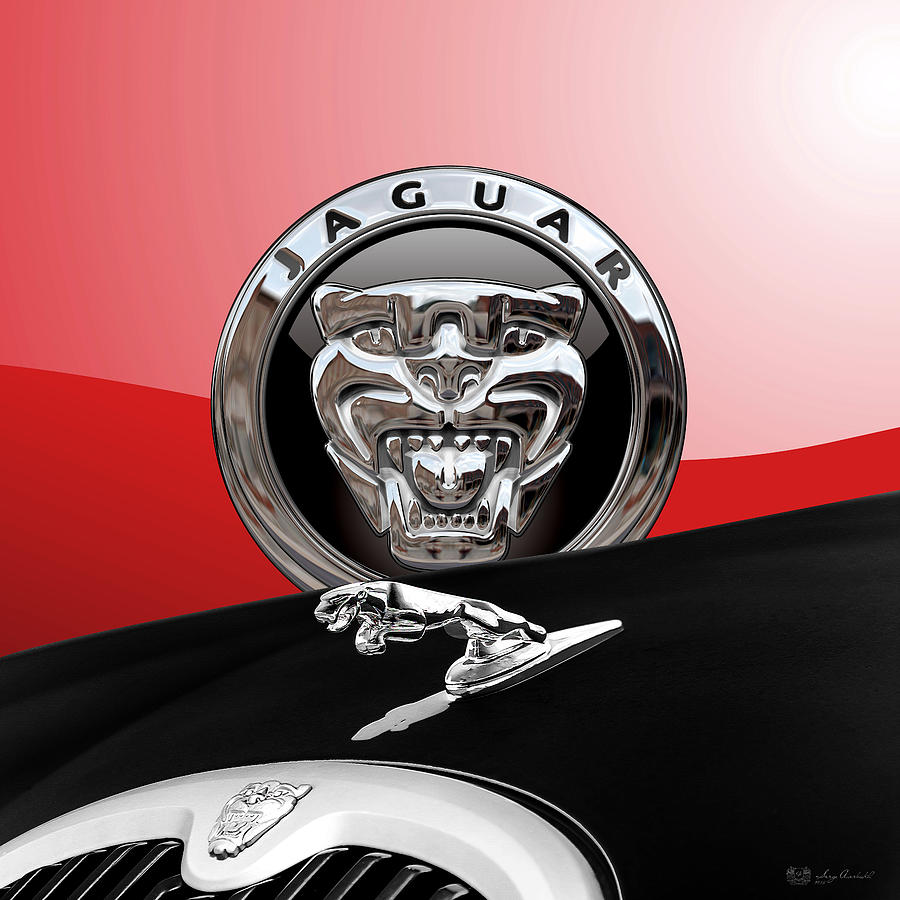 Black Jaguar - Hood Ornaments and 3 D Badge on Red is a photograph by Serge Averbukh which was uploaded on July 27th, 2016.

Introducing 'Auto Badges' collection by Serge Averbukh, showcasing convergent media paintings of stunning automotive insignia and heraldry. Here you will find fine art pieces featuring Jaguar - Hood Ornament and 3D Badge on Red.
Jaguar is a brand of Jaguar Land Rover, a British multinational car manufacturer headquartered in Whitley, Coventry, England, owned by Indian Tata Motors since 2008.
Jaguar was founded as the Swallow Sidecar Company by Sir William Lyons in 1922, originally making motorcycle sidecars before developing passenger cars. The name was changed to Jaguar after World War II to avoid the unfavorable connotations of the SS initials. Sale to The British Motor Corporation followed in 1966, the resulting enlarged company now being renamed as British Motor Holdings (BMH), which in 1968 merged with Leyland Motor Corporation and became British Leyland, itself to be nationalized in 1975.
Jaguar was de-merged from British Leyland and was listed on the London Stock Exchange in 1984, becoming a constituent of the FTSE 100 Index until it was acquired by Ford in 1990. Jaguar has, in recent years, manufactured cars for the British Prime Minister, the most recent delivery being an XJ in May 2010. The company also holds royal warrants from Queen Elizabeth II and Prince Charles.
Jaguar cars today are designed in Jaguar Land Rover's engineering centres at the Whitley plant in Coventry and at their Gaydon site in Warwickshire, and are manufactured in Jaguar's Castle Bromwich assembly plant in Birmingham. The Jaguar XF (codename: X250) is an executive/mid-size luxury car and estate produced by British car manufacturer Jaguar Cars which was first revealed in autumn 2007 as a replacement for the Jaguar S-Type.