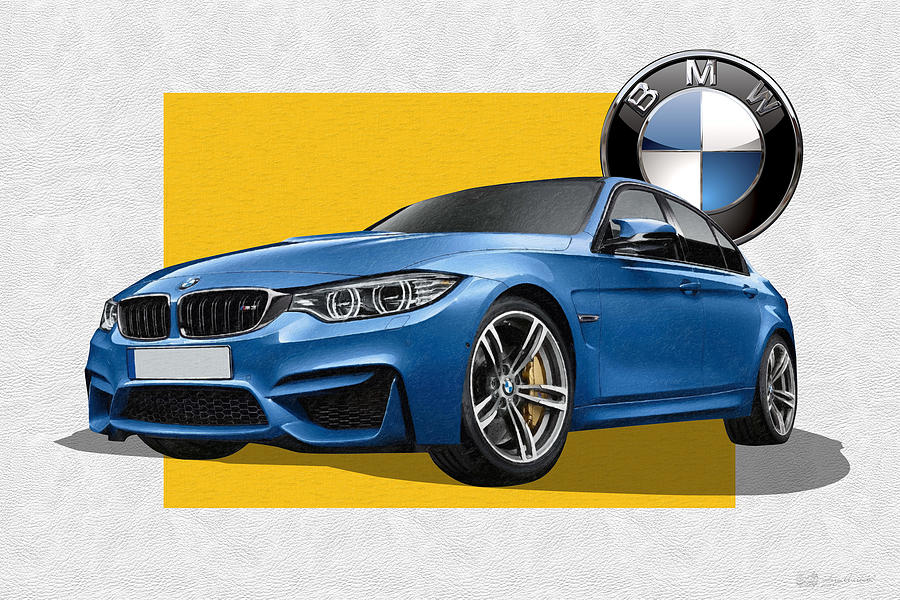 Introducing ‘BMW’ collection by Serge Averbukh, showcasing digital paintings of some of the coolest and most sought after BMWs of past and present along with amazing digitally crafted car makers’ insignia and badges (logos). Here you will find framed and wrapped/stretched canvas fine art prints, featuring a digital painting of a 2016 BMW M3 Sedan with 3D Badge.
Bayerische Motoren Werke AG (English: Bavarian Motor Works), commonly known as BMW or BMW AG, is a German automobile, motorcycle and engine manufacturing company founded in 1916.
BMW is headquartered in Munich, Bavaria, Germany. It also owns and produces Mini cars, and is the parent company of Rolls-Royce Motor Cars. BMW produces motorcycles under BMW Motorrad. In 2010, the BMW group produced 1,481,253 automobiles and 112,271 motorcycles across all its brands. BMW is part of the German Big 3 luxury automakers, along with Audi and Mercedes-Benz, which are the three best-selling luxury automakers in the world.
The BMW M3 is a high-performance version of the BMW 3-Series, developed by BMW's in-house motorsport division, BMW M.
M3 models have been derived from the E30, E36, E46, E90/E92/E93, and F80 3-series, and sold with coupe, saloon and convertible body styles. Upgrades over the "standard" 3-Series automobiles include more powerful and responsive engines, improved handling/suspension/braking systems, aerodynamic body enhancements, and interior/exterior accents with the tri-colour "M" (Motorsport) emblem.
The last M3 coupe was produced in Germany on 5 July 2013, replaced by the F82/F83 M4 Coupe and convertible starting with the 2015 model year, but the M3 name will remain in use for the saloon version.
The BMW M3 remains the only car ever to have earned more titles than the venerable Porsche 911 in Motorsport, and also is the most successful touring, and grand touring car ever to have participated in racing. Since the current M3 debuted, Daimler has launched its all-new Mercedes-AMG C63, and Cadillac is taking on BMW directly with the ATS-V. Both cars are incredible machines, and therefore BMW needed to refresh the M3 in addition to the changes made to the regular 3-series for 2016. The alterations are less extensive with the M3. The head- and taillights receive a sharper, more angular contour, and up front, the M3 now illuminates the road with icy, LED beams. The taillights look more aggressive as well. There are also two new (extracost) exterior paint colors. Like the regular 3-series, the M3 gets a tweaked interior, although we wonder if this ultrasporty derivative really needs more chrome inside. At least the upgraded iDrive and navigation setup will be more responsive.

Everything else carries over—and that's not a bad thing. The new M3 retains the structural changes, unique suspension components, lightweight seats, and the carbon-fiber pieces that set it apart from the regular 3-series.
The M3's S55 engine is loosely based on the N55 engine that is being dropped from the regular 3-series, but the S55 deserves to live on unchanged. Rated at 425 horsepower and 406 lb-ft of torque, the twin-turbocharged straight-six is mated to either a six-speed manual or a Getrag-sourced seven-speed dual-clutch automatic, the latter of which is not available on any other 3-series.