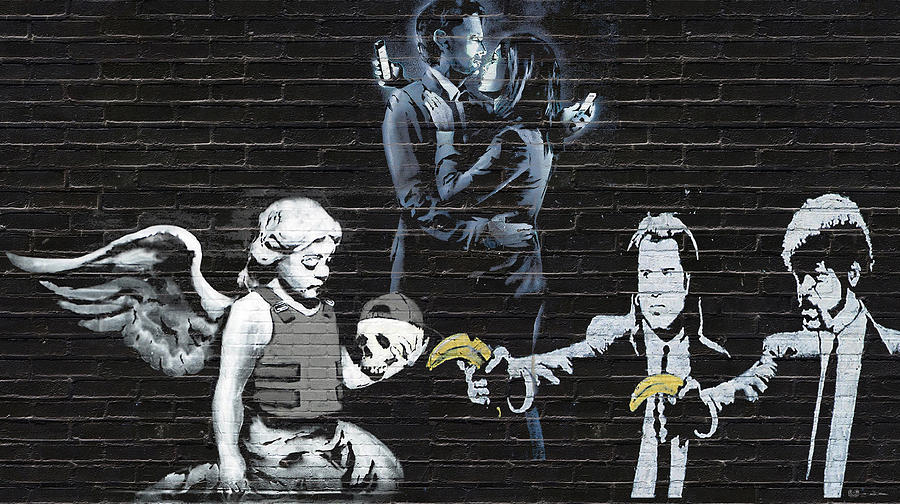 Banksy - Failure To Communicate is a photograph by Serge Averbukh which was uploaded on May 18th, 2015.

Introducing 'Urban Graffiti' collection by Serge Averbukh, showcasing digital paintings created in such way that they look and feel like urban street... more

Introducing 'Urban Graffiti' collection by Serge Averbukh, showcasing digital paintings created in such way that they look and feel like urban street art.
Here you will find a selection of fine art prints, framed as well as stretched/wrapped canvas, featuring a collage composition �Banksy - The Tribute - Failure to Communicate� based on Banksy�s art scattered throughout various corners of the world.
Banksy is a pseudonymous English graffiti artist, political activist, film director, and painter. His satirical street art and subversive epigrams combine dark humour with graffiti executed in a distinctive stencilling technique. His works of political and social commentary have been featured on streets, walls, and bridges of cities throughout the world.
Banksy's work grew out of the Bristol underground scene, which involved collaborations between artists and musicians. Observers have noted that his style is similar to Blek le Rat, who began to work with stencils in 1981 in Paris. Banksy says that he was inspired by "3D", a graffiti artist who later became a founding member of Massive Attack, an English musical group.
Banksy displays his art on publicly visible surfaces such as walls and self-built physical prop pieces. Banksy does not sell photographs or reproductions of his street graffiti, but art auctioneers have been known to attempt to sell his street art on location and leave the problem of its removal in the hands of the winning bidder. Banksy's first film, Exit Through the Gift Shop, billed as "the world's first street art disaster movie", made its debut at the 2010 Sundance Film Festival. The film was released in the UK on 5 March 2010. In January 2011, he was nominated for the Academy Award for Best Documentary for the film. In 2014, he was awarded Person of the Year at the 2014 Webby Awards.
Being a huge Banksy�s fan, I do realize that selling someone else�s art is somewhat unethical. Yet, I am a firm believer that this art has to be brought to the attention of as many people as possible. And the only way of doing this is a commercial way, which Banksy himself has chosen to avoid. I decided to do this in a form of tribute collages - basically compilations of Banksy�s famous masterpieces.