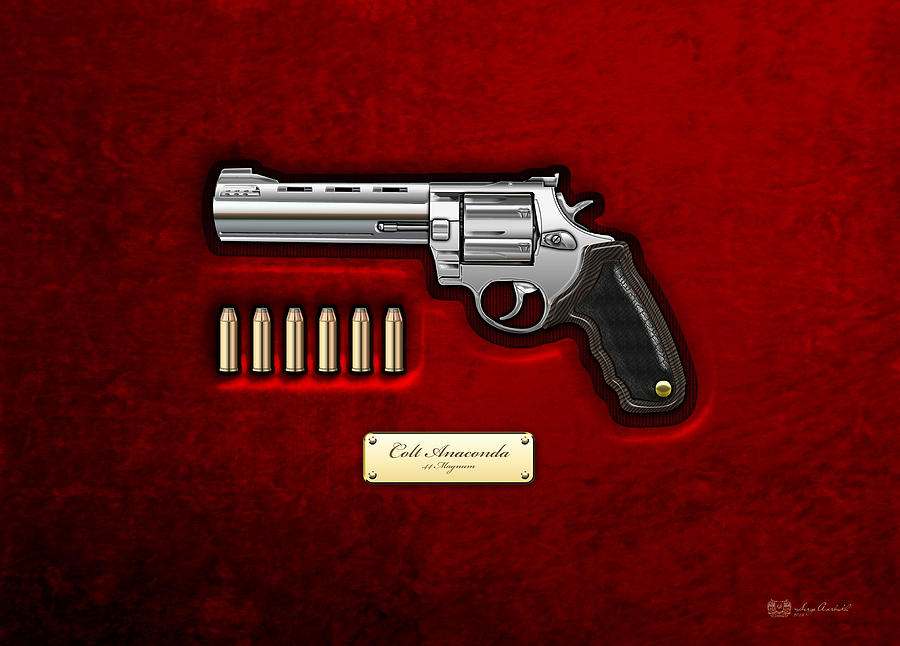 .44 Magnum Colt Anaconda On Red Velvet is a photograph by Serge Averbukh which was uploaded on April 28th, 2015.

Introducing The Armory collection by Serge Averbukh, showcasing meticulous digital reproductions of various historical and modern weapons. Here you will find framed and wrapped/stretched canvas fine art prints, featuring a .44 Magnum Colt Anaconda with Ammo on Blue Velvet.
Colt's Manufacturing Company (CMC, formerly Colt's Patent Firearms Manufacturing Company) is a United States firearms manufacturer, whose first predecessor corporation was founded in 1836 by Samuel Colt. Colt is best known for the engineering, production, and marketing of firearms over the latter half of the 19th and the 20th century. Colt's earliest designs played a major role in the popularization of the revolver and the shift away from earlier single-shot pistols. While Sam Colt did not invent the revolver concept, his designs resulted in the first very successful ones.
Introduced in 1990, the Colt Anaconda is a large frame double-action revolver featuring a full length under-barrel ejection-rod lug and six round cylinder, designed and produced by the Colt's Manufacturing Company. Chambered for the powerful .44 Magnum and .45 Colt centerfire ammunition cartridges, the Anaconda marked the Hartford, Connecticut firm’s first foray into the popular large-bore Magnum pistol market. Built on a new and heavier ‘AA’ frame, the Anaconda was brought out to compete with .44 Magnum contemporaries such as the Smith & Wesson Model 29, the Sturm, Ruger & Co. Redhawk and Blackhawk, and the Dan Wesson Firearms Model 44. Considering that many of these models had been marketed and sold for fully 35 years upon its introduction, the Anaconda was a very late entry into the large-bore handgun market.