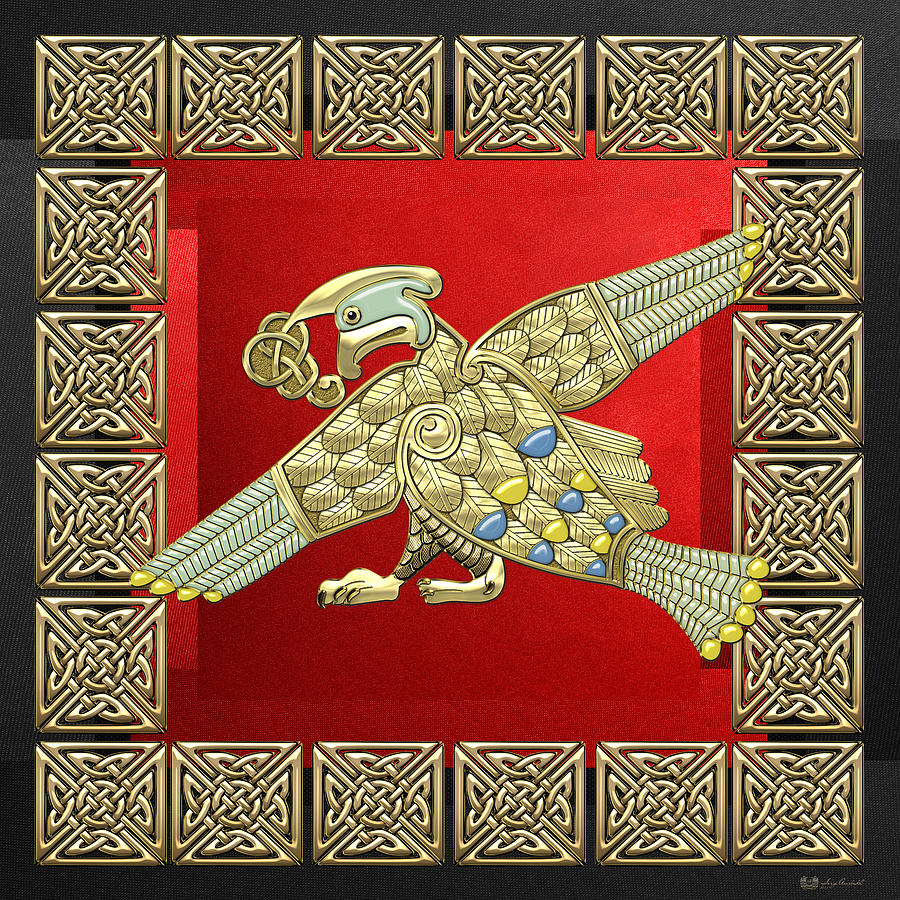 Sacred Celtic Bird On Red And Black is a photograph by Serge Averbukh which was uploaded on June 11th, 2015.

Introducing “Celtic Treasures” Collection by Serge Averbukh, showcasing treasures and artifacts of the ancient Celtic cultures, presented in visually-stunning and original manner. Here you will find framed and wrapped/stretched canvas fine art prints, featuring Sacred Celtic Bird on Red and Black.
The Celts were people in Iron Age and Medieval Europe who spoke Celtic languages and had cultural similarities, although the relationship between ethnic, linguistic and cultural factors in the Celtic world remains uncertain and controversial. The exact geographic spread of the ancient Celts is also disputed; in particular, the ways in which the Iron Age inhabitants of Great Britain and Ireland should be regarded as Celts has become a subject of controversy.
The history of pre-Celtic Europe remains very uncertain. According to one theory, the common root of the Celtic languages, a language known as Proto-Celtic, arose in the Late Bronze Age Urnfield culture of Central Europe, which flourished from around 1200 BC. In addition, according to a theory proposed in the 19th century, the first people to adopt cultural characteristics regarded as Celtic were the people of the Iron Age Hallstatt culture in central Europe (c. 800–450 BC), named for the rich grave finds in Hallstatt, Austria. Thus this area is sometimes called the 'Celtic homeland'. By or during the later La Tčne period (c. 450 BC up to the Roman conquest), this Celtic culture was supposed to have expanded by diffusion or migration to the British Isles (Insular Celts), France and The Low Countries (Gauls), Bohemia, Poland and much of Central Europe, the Iberian Peninsula (Celtiberians, Celtici, Lusitanians and Gallaeci) and Italy (Canegrate, Golaseccans and Cisalpine Gauls) and, following the Gallic invasion of the Balkans in 279 BC, as far east as central Anatolia (Galatians).
By the mid-1st millennium AD, with the expansion of the Roman Empire and the Great Migrations (Migration Period) of Germanic peoples, Celtic culture and Insular Celtic had become restricted to Ireland, the western and northern parts of Great Britain (Wales, Scotland, and Cornwall), the Isle of Man, and Brittany. Insular Celtic culture diversified into that of the Gaels (Irish, Scottish and Manx) and the Brythonic Celts (Welsh, Cornish, and Bretons) of the medieval and modern periods. A modern "Celtic identity" was constructed as part of the Romanticist Celtic Revival in Great Britain, Ireland, and other European territories, such as Portugal and Spanish Galicia. Today, Irish, Scottish Gaelic, Welsh, and Breton are still spoken in parts of their historical territories, and Cornish and Manx are undergoing a revival.