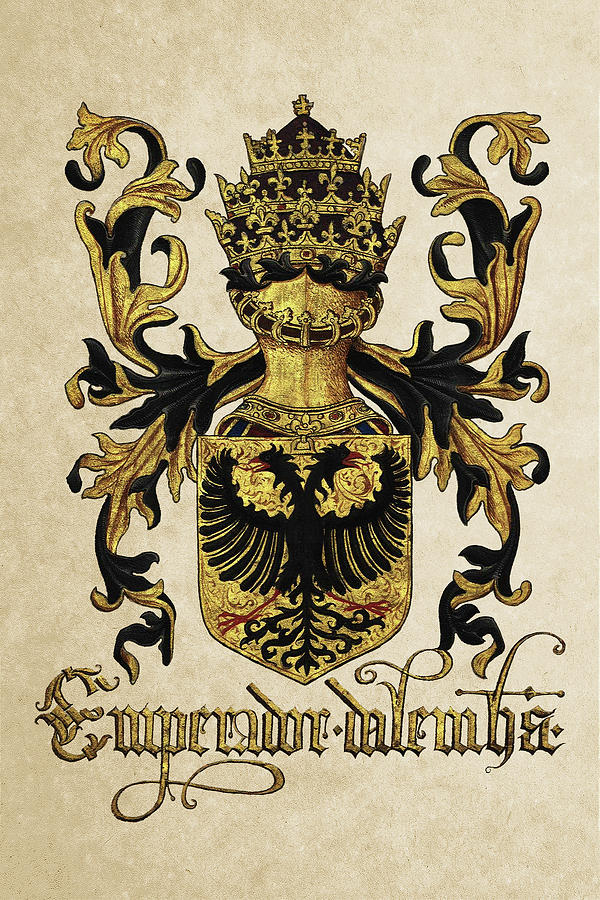 Emperor of Germany Coat of Arms - Livro do Armeiro-Mor is a photograph by Serge Averbukh which was uploaded on June 22nd, 2016.

Emperor of Germany Coat of Arms - Livro do Armeiro-Mor

Emperor of Germany Coat of Arms - Livro do Armeiro-Mor

Introducing 'Roll of Arms ‘collection by Serge Averbukh, showcasing convergent media artwork featuring historical antique and vintage rolls of arms, carefully restored and transformed into gorgeous large format fine art prints. Here you will find fine art pieces featuring Emperor of Germany Coat of Arms from Livro do Armeiro-Mor, a Portuguese official roll from 1509, compiled by Joăo do Cró, Portugal King of Arms. It includes almost 400 real and imaginary coats of arms, including those of the Nine Worthies, of the states of Europe, Africa and Asia, of the electors of the Holy Roman Emperor, of the pairs of France, of members of the Portuguese Royal Family and of the other noble families of Portugal.
The Kingdom of Germany started out as the eastern section of the Frankish kingdom, which was split by the Treaty of Verdun in 843. The rulers of the eastern area thus called themselves rex Francorum, king of the Franks, and later just rex. A reference to the "Germans," indicating the emergence of a German nation of some sort, did not appear until the eleventh century, when the pope referred to his enemy Henry IV as rex teutonicorum, king of the Teutons, in order to brand him as a foreigner. The kings reacted by consistently using the title rex Romanorum, King of the Romans, to emphasize their universal rule even before becoming emperor. This title remained until the end of the Empire in 1806, though after 1508 Emperors-elect added "king in Germany" to their titles. (Note: in this and related entries, the kings are called kings of Germany, for clarity's sake)
The Kingdom of Germany was never entirely hereditary; rather, ancestry was only one of the factors that determined the succession of kings. The king was formally elected by the leading nobility in the realm, continuing the Frankish tradition. Gradually the election became the privilege of a group of princes called electors, and the Golden Bull of 1356 formally defined election proceedings.
In the Middle Ages, the king did not assume the title "Emperor" (since 982 the full title was Imperator Augustus Romanorum, Venerable Emperor of the Romans) until crowned by the pope. Moving to Italy, he was usually first crowned with the Iron Crown of Lombardy, after which he assumed the title of rex Italiae, King of Italy. After this he would ride on to Rome and be crowned emperor by the pope. See Coronation of the Holy Roman Emperor for more details.
Maximilian I was the first king to bear the title of emperor-elect. After the failure in 1508 of his attempt to march to Rome and be crowned by the pope, he had himself proclaimed emperor-elect with papal consent. His successor Charles V also assumed that title after his coronation in 1520 until he was crowned emperor by the pope in 1530. From Ferdinand I onwards, all emperors were merely emperors-elect, although they were normally referred to as emperors. At the same time, chosen successors of the emperors held the title of king of the Romans, if elected by the college of electors during their predecessor's lifetime. See King of the Romans for more details.