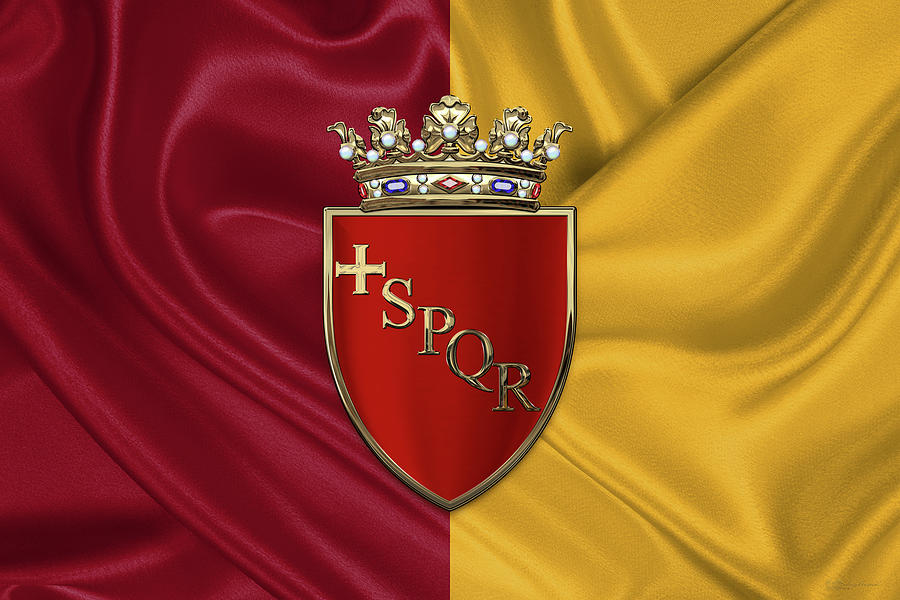 Coat of arms of Rome over flag of Rome is a photograph by Serge Averbukh which was uploaded on October 5th, 2016.

Coat of arms of Rome over flag of Rome

Coat of arms of Rome over flag of Rome

Introducing ‘Cities of the World’ series, part of the ‘World Heraldry’ collection by Serge Averbukh, showcasing stunning convergent media paintings of city coats of arms, emblems and flags. Here you will find pieces featuring Coat of arms of Rome over flag of Rome.
Rome (Italian: Roma, Latin: Rōma) is a city and special comune (named Roma Capitale) in Italy. Rome is the capital of Italy and of the Lazio region. It is also the country's largest and most populated comune and fourth-most populous city in the European Union by population within city limits. The Metropolitan City of Rome has a population of over 4 million residents. The city is located in the central-western portion of the Italian Peninsula, within Lazio (Latium), along the shores of Tiber river. The Vatican City is an independent country geographically located within the city boundaries of Rome, the only existing example of a country within a city: for this reason Rome has been often defined as capital of two states.
Rome's history spans more than two and a half thousand years. While Roman mythology dates the founding of Rome at only around 753 BC, the site has been inhabited for much longer, making it one of the oldest continuously occupied sites in Europe. The city's early population originated from a mix of Latins, Etruscans and Sabines. Eventually, the city successively became the capital of the Roman Kingdom, the Roman Republic and the Roman Empire, and is regarded as one of the birthplaces of Western civilisation and by some as the first ever metropolis. It is referred to as "Roma Aeterna" (The Eternal City) and "Caput Mundi" (Capital of the World), two central notions in ancient Roman culture.
After the fall of the Western Empire, which marked the beginning of the Middle Ages, Rome slowly fell under the political control of the Papacy, which had settled in the city since the 1st century AD, until in the 8th century it became the capital of the Papal States, which lasted until 1870.
Beginning with the Renaissance, almost all the popes since Nicholas V (1422–55) pursued coherently along four hundred years an architectonic and urbanistic programme aimed to make of the city the world's artistic and cultural centre. Due to that, Rome became first one of the major centres of the Italian Renaissance, and then the birthplace of both the Baroque style and Neoclassicism. Famous artists, painters, sculptors and architects made Rome the centre of their activity, creating masterpieces throughout the city. In 1871 Rome became the capital of the Kingdom of Italy, and in 1946 that of the Italian Republic.