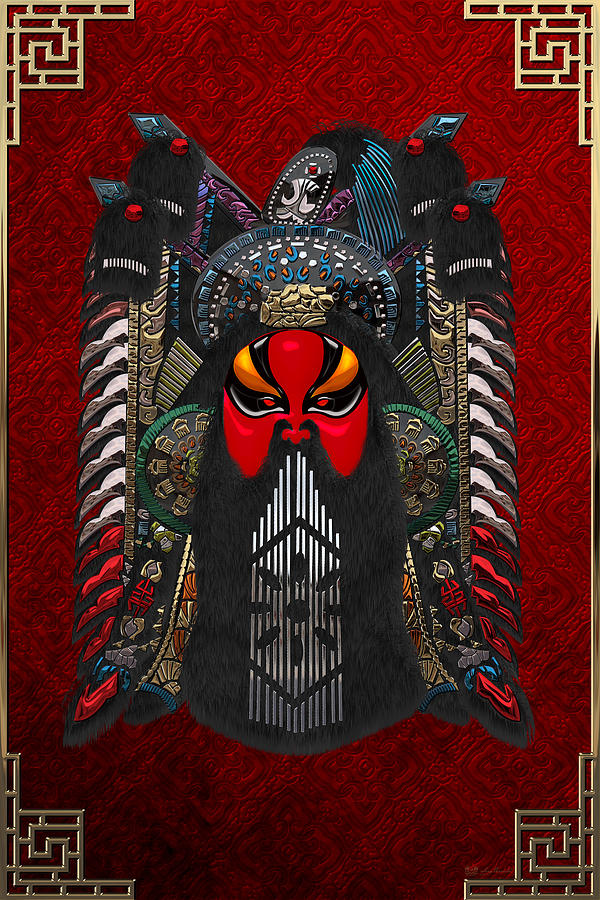 Chinese Masks - Large Masks Series - The Red Face is a photograph by Serge Averbukh which was uploaded on March 16th, 2016.

Introducing “Treasures of China” collection by Serge Averbukh, showcasing meticulous digital paintings of various masks originated from the region. Here you will find framed and wrapped/stretched canvas fine art prints, featuring the Large Masks Series - The Red Face
Peking opera or Beijing opera (simplified Chinese: 京剧; traditional Chinese: 京劇; pinyin: Jīngjů) is a form traditional Chinese theatre which combines music, vocal performance, mime, dance, and acrobatics. It arose in the late 18th century and became fully developed and recognized by the mid-19th century. The form was extremely popular in the Qing Dynasty court. Major performance troupes are based in Beijing and Tianjin in the north, and Shanghai in the south. The art form is also preserved in Taiwan, where it is known as Guoju). It has also spread to other countries such as the United States and Japan.
While the cultural meaning and symbolism of color in China has been significantly influenced by the principles of Feng Shui, the masks of the Chinese opera use color to offer a more expressive point of view. Elaborately decorated with color and patterns, masks have been used in Chinese opera for over a thousand years. However, it was during the Qing Dynasty (1644-1911) that the colors began being used consistently to represent certain personality traits and human characteristics. In Chinese opera color takes the audience on a magical journey where it not only lights up the stage with an array of radiant hues; it also stirs up specific emotions and allows the audience to feel and understand the story being told. Color is used to quickly connect the audience to each character’s traits. In fact, the audience often feels such an instant and intimate understanding that you might even say that the colors are the characters. Red in Chinese opera, like in Feng Shui, carries a traditional well-loved radiance. The color red in an opera is understood to symbolize positive traits such as intelligence, heroism, integrity and loyalty. And when the art or costume director tires of red on stage, he or she can bring in the slightly less utilized color purple. Purple conveys the same positive perception as red, but with the added attributes of respect, sophistication, nobleness and a sense of justice.